Mycoremediation is a 35-100 year old field that is part of a larger approach known as ‘Bioremediation’ – which attempts to deal with harmful substances produced by society by making them food for organisms (plants- phytoremediation; microbes- microremediation and fungi- mycoremediation) and increasing those organisms appetite for those substances. These processes occur naturally in soils and water as fungi and bacteria and other organisms utilize organic materials as a source of energy or as a source of materials (predominantly carbon) to build and maintain cellular structures. However these natural processes can be enhanced to achieve a more rapid effect.

And that is where we come in: bioremediation is about allying with living systems, and people, to detoxify contaminated environments by binding, extracting and/or transforming contaminants. Fungi have their own ‘chemical toolkit’ of digestive enzymes that can break down chemical complex chemical toxins like petroleum, plastics, pesticides, and munitions into less toxic chemicals. Fungi can also be used to filter water, sequester or extract heavy metals and radiation, and initiate many lifecycles integral to regeneration of a healthy biodiverse ecosystem. This is known as mycoremediation- myco meaning fungus and remediation meaning to clean, resolve or correct.

It isn’t going to save the world. It can help address or heal to some extent the symptoms- some of the toxicity, pollution and damage that colonization and its pal capitalism create and perpetuate- but we need to address the root causes- the systems and institutions and culture that require toxic pesticides and Agent Orange- which are made of the same stuff, more or less.

Bioremediation is being developed by scientists for industry; grassroots discoveries are coopted and patented; and worst of all, bioremediation potentials are used to greenwash and enable/justify fracking, the tarsands.

Lets us not forget to first Reduce, Reuse, and Recycle. To which should be added a fourth step: Remediate.

Nothing compares to intact, wild, self-determined ecosystems and cultures. And fungi has already been a nuisance to colonization and capitalism since the beginning. For instance, Trainwrecker fungus (Lentinus lepideous) degrades railroad ties even soaked in creosote and interfered with railroad building out west.

It isn’t effective on its own: a more holistic approach is best, working with microbes, plants, and fungi all together, as we see in nature. For instance, fungi have ability to break down bigger hydro-carbon ring structures, to a size that bacteria can then work on; and then plants can take up smaller chain hydrocarbons and nutrients that bacteria make available. Different environments, conditions and contamination favor different remediation approaches.

I’ve been working on exploring some of the tools of bioremediation in an urban backyard that is contaminated with heavy metals. For more info about this project, see Backyard Bioremediation Project

One thought on “Bioremediation” 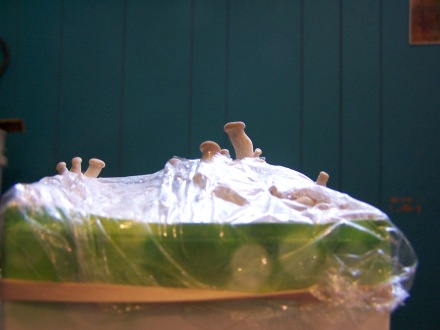 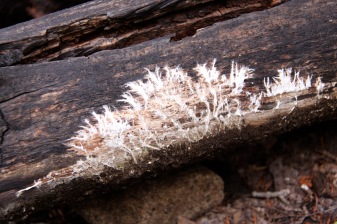